Hang In There, Baby!

I wonder sometimes about the people who “make it” in this business. Sure, I think there are those who stumble into it ass-backwards and make a killing. They write a manuscript (and maybe their first draft is super stellar), they find an agent on their first try, the book goes out on submission and editors everywhere want it. An auction ensues. Instant overnight success ala Stephenie Meyer, right?

But that’s not the real world. And I have a hard time believing that even those rare “overnight successes” didn’t have their own stumbling blocks along the way. 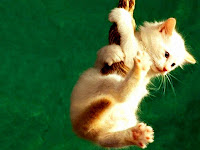 And what about the rest of us? Most of us?

It certainly didn’t happen that way for me. Sure, The Body Finder sold quickly, but it also wasn’t my first book. Or my second. And I had (ehem…have) stacks of rejection letters to prove it.

I had my first agent when I was twenty. Yeah, you heard me, twenty. And I thought, that’s it, I’ve made it! Now, I can sit back and wait for the bags-o-money to roll in.

My book didn’t actually sell. My dreams of lighting my cigars (that’s right, I probably would have started smoking cigars) with hundred dollar bills went up in smoke (pardon the pun!).

But I didn’t give up. I rewrote my book, and found yet another agent. And this time I was in my mid-twenties…much older, and much wiser. *cough*yeahright*coughcough*

And, again, my book didn’t sell. So this time I tucked my manuscript away in a drawer. And every few years I would pull it out, dust it off, rewrite it, and resubmit it to agents. The technology got better. I moved from a typewriter to a word processer to a computer. Searching for agents got easier, The Writers Market moved from doorstopper-sized hardcopy to an online version. But, alas, my poor little manuscript just didn’t have what it took to find a publishing home. It had something, just not quite the right thing.

Unfortunately, I was stuck. I’d gotten just enough positive feedback to keep me clinging to it like it was my last, great hope. Hell, I’d had two agents. I even had a two page, single-spaced critique letter from an editor at William Morrow who was kind enough to read my entire manuscript despite the fact that I’d blindly sent it to her without knowing I needed an agent first. I had just the right amount of encouragement to keep me from letting it go.

And then one day I made a decision. One more revision, I decided. The last one, and then I was done with it. Then I was moving on. If I was going to be a writer, then by god I was going to write. New stuff. Even if it never found a publishing home. Even if I was only writing it for me. I was tired of the old book. I wanted to write!

It was very freeing, that moment.

And I did it; I revised the old manuscript, sent out a few more queries, gathered a few more rejections, and moved on. I wrote a second book, and sent out new queries. Got some nibbles, requests for fulls, definitely a lot more positive this time. Could it be that my writing had improved?

Again, I didn’t waste any time, and I started on a new project: The Body Finder. It came together quickly. I was working two jobs, I have three kids, and a busy household. And somehow I would squeeze in a couple of hours every day. My husband did the dishes and got the kids ready for bed. I got up early and stayed up late.

I finished it, and had a feeling that this was something. I was supposed to pitch my second novel at a writer’s conference just weeks away, and instead decided to pitch this new project.

But you know what? That wasn’t it at all. There was no fate or kismet involved. It was a lot of hard work. It was dedication and sticking with it, even knowing it was quite possibly a pipe dream. It was believing in myself.

The people that make it—and I believe this about almost any industry that’s difficult to break into—aren’t really the ones who accidentally stumble onto the scene and make a splash (yes, there are those rare exceptions). Instead, they are the ones who bust their asses! The ones who find the time, who never give up, who look past the rejections and keep on working, learning, growing.

I might be the Paula Abdul of writing, but never let the Simons get you down. Not if you really want it!
Email Post

Anonymous said…
I'm currently revising my manuscript on a 2nd round and hoping to get an agent, even if I'm 18. This blog post is truly an inspiration and especially to hear it from a professional. Plus, can't wait to read your new YA book and best wishes with your future books.

Little Ms J said…
The Paula Abdul of writing? I so want you to do a music video vlog. I double dog dare you.

Guess what? I officially have a WIP. I haven't had one in a long time and guess what else?

Patti said…
I'm at that point. I've worked on my current WIP for long enough that if it doesn't work then it's on to something else. Great insights.
November 11, 2009 at 10:43 AM

Kimberly Franklin said…
Well said! Sometimes the best manuscripts are never meant to be seen. The best thing I love about writing is with each new manuscript it's like a fresh start, and you never know if it will be the one to hit the jackpot.

And from what I've seen most 'overnight successes' take years to accomplish.

Kimberly Derting said…
Good luck, Erin, you'll have to post here if (when!) you hear good news...those are my favorite posts!!!

LiLa - Right back at ya, sistas!

LMJ - OMG I want to know all about it! Seriously, can't wait to find out more!!!

Patti - I sort feel like my advice was a bit contradictory: "never give up" but "don't get stuck". I'm thinking it's sort of a personal decision. For me, it was time to move on...

Sarah and Shelli - Thanks guys!!!

Kimberly (great name, btw) - I love that fresh start feeling! It's almost as good as first kiss feeling, but without the really good butterflies!!!
November 11, 2009 at 5:00 PM

Heidi Willis said…
Awesome post! I so appreciate this kind of insight, because it does seem like so many people just "happen" into contracts... write something in a few weeks, send it out and two weeks later have a six book contract. I know it doesn't happen often, but boy it seems like it sometimes.

Sometimes the hardest, and best thing, is to let go of the one we love so much and just move on. It's hard to believe we could love another as much as that first, but inevitably we do.
November 11, 2009 at 7:16 PM

And Heidi, I think those big deals just get so much play because they are so unusual, but it starts to sound like the norm because it's all we hear about. No one really talks about the "normal" deals.
November 12, 2009 at 7:07 AM

Kimberly Franklin said…
I'll go ahead and say it - We have the best name EVER!

Sherrie Petersen said…
I'm so glad you posted this! I needed that kind of encouragement right now so thank you, Kimberly!!!
November 12, 2009 at 8:59 PM

Robin Burrows said…
Over and over again, published writers have told me that the best way to be a writer is to just write - start writing and keep writing while trying to get your manuscripts out there.

I wrote about 15? YA or middle grade short stories (novels) while I was in high school. The majority of them were 100 pages handwritten. (I didn't have a computer or typewriter.) Looking back they are really awful, but they were a step and each one improved. I stopped writing for a while in college because I was overwhelmed by all of the coursework. But a new setting started to grow in my head. I wrote a bit on it and had pages and pages of notes fleshing out the world. It was a thousand times better than the stories I wrote in high school. But in the end, it just wasn't working for me. I struggled and struggled with it for years. It was supposed to be my perfect break-out project, but it just wasn't right. Then a decided to set aside that story world and create a new one; start from scratch with everything. It really did help! I'm working on my 2nd manuscript in the new setting right now, and I plan to go back and edit the first after I finish this one.

What you said is so true; just keep writing new stories and each story helps bring you closer to your goal. I FEEL closer now than I've ever felt before. I think my stories improve with each one. Soon I hope to join you in the world of the published! :-)
November 13, 2009 at 11:39 AM

Robin - Hopefully you'll have great news sometime in the near future! I'm glad to hear from you, it's been a while!!!

Robin Burrows said…
Yeah, I disappeared into nowhere land (my day job, traveling for it, helping a friend pack up and entire house and move, writing conferences, etc). I am still there for the most part. Almost all of my free time consists of writing my new novel. The beginning started out rough, but it's going well now. I just had a character push his way onto the writing stage and try to steal some word-time from my MC (and driving her crazy to boot). It's really nice when the story starts to take on a life of its own liek that. I'm at about 40k right now and still have a lot to write, so it might vanish for a while again. *waves*
November 17, 2009 at 7:30 AM