Sometimes even before the cover image, the title is the first impression we have of a book. And whether we want to admit it or not, they’re important. HUGELY important. And you know what? I kinda suck at titles.

Don’t get me wrong, I LOVE my title. Love, love it, and maybe even want to marry it. But it was an accidental title, a placeholder title that ([insert sarcasm font here] with my vast knowledge of the publishing industry) I was sure the publisher was going to change anyway. THE BODY FINDER…it was what my main character could do, not a well thought out title of a YA novel. I even had a short list (a VERY sort list) of alternates, just in case I was consulted in the matter. But that’s the weird thing…I wasn’t consulted. Because my publisher—the editorial staff and Sales and Marketing—they loved the title too. Thus, THE BODY FINDER it was.

And I was left standing there going: “What the hell just happened…?”

For book two I was more careful. Thoughtful. I spent a lot of time thinking about what meaning I wanted to convey. I weighed the feel of the book and the path that my main character took. And I came up with the perfect title. My agent loved it, and my editor too. Close your eyes and imagine it: *waves hand dramatically*

It had everything, it was evocative and dark and a little mysterious…

Umm, yeah, well apparently it was the perfect title. For a series of books in the UK. And it was way too close to Francesca Lia Block’s book (also by HarperCollins) titled PRETTY DEAD. (I wish someone would have told me before I bought http://www.thebeautifuldead.net/. Yeah, it works…)

So it was back to the drawing board. And then one day I was going through my edits and I came across a line that stood out to me: “…the desires of the dead.” And that was it, my title: DESIRES OF THE DEAD. Another accidental title. But, again, I love it. And again, a possible impending nuptial. (What can I say? I’m fickle like that!)

My current project doesn’t really have a title yet. And I’m struggling to come up with the one. S-T-R-U-G-G-L-I-N-G! I’ll know it when I find it. But I haven’t yet. 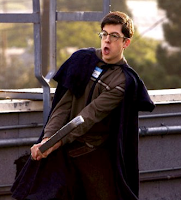 watching the movie Role Models, I woke up and my husband had renamed my manuscript “THE WHISPERING EYE” as a joke. If you’ve seen the movie you’ll get the reference. If you haven’t, then you’re on your own to figure it out. But I wonder what my editor would think if I sent it in like that. I can just imagine the Sales and Marketing meeting for that one. I’m guessing it would be fairly controversial…

So, I want to know what titles you love and why. And if you’re a writer, I wanna know how you’ve come up with your titles.

Because this title thing, it daunts me. Because, like I said, I sort of suck at it…
Email Post

lisa and laura said…
I love titles like Hotel on the Corner of Bitter and Sweet and The Forest of Hands and Teeth. They just roll off the tongue, no? I also love one word titles like Shiver.

As for us, we suck hard at titles. It took us forever to figure out The Haunting of Pemberly Brown and we're still not 100% on She's Leaving Home. Catherine always calls our titles "wet" which makes us laugh.
November 25, 2009 at 11:24 AM

Donna Gambale said…
Titles are really tough for me -- chapter titles, no (and I feel very strongly about my book having chapter titles), but the actual whole book shebang? I settled on MULTIPLE CHOICE because my WIP has three points of view and a lot of it is about making choices... plus there's that whole test thing that happens in high school. But, like, if that title sticks and I write a sequel, it's so being called TRUE OR FALSE.

Patti said…
I how problems with titles as well. I'm not totally happy with mine, it's a work in progress.

Kimberly Derting said…
LiLa - "Wet" titles, huh? I've never heard that before, but that's sort of how I feel about the list I have now. I just feel *meh* about all of them...

Donna - I love MULTIPLE CHOICE, especially for a book with several POVs. I may need to hire you as a title consultant.

My second, ALL ABOUT VEE was originally FAT GIRLS IN LA.

Little Ms J said…
I love good titles. I was told that mine is "cliche." I wanted to ask the agent if he would tell his mom that the Bible was a cliche (it is taken from a scripture read to me by someone at a pivotal moment in the book), but I'd probably have lost that argument.
November 25, 2009 at 11:25 PM

But I suck at titles myself. Maybe I'll fall into one eventually.

Kimberly Franklin said…
Titles...ugh! My WIP has a title change weekly. Wait, that's a lie. It's more like daily.

I always thought the title would be the easiest part, but I was way wrong!

And how come everyone else's titles always sound so much better. I'm always like, "why didn't I think of that?"

Kimberly Derting said…
Leigh - Definitely prefer your current titles, especially ALL ABOUT VEE (which should have made my list because I LOVE IT!!!).

LMJ - I would pay to see you argue that. Maybe a good first VLOG post for you...?

Jess - Absolutely LOVE the one-word titles too. I've always wanted one, but could never find one that was *perfect*. Ellen Hopkins is the master!!!

Kimberly - I've heard people who say they *start* with the title and build their story from there. I find that completely fascinating!
December 1, 2009 at 9:43 AM